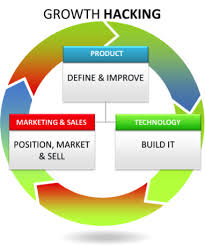 With so many mutli-channels and multi-funnel layers these days online it’s very important to tie all of the funnels together through Growth Hacking.  The overall theme is that they are tied to daily social networks.  Such as facebook, twitter, snapchat, and others.  People use these social networks daily as part of their life, and they are evolved products.  It’s important that you fuse all of them together in an inter-connected way with bio’s.  This takes a lot of clarity with your headlines, to elevator pitches and defining who you are as a business.  You see, as the world is expanding and more long-tail micro-niches are being made every day it’s more important that you continue to evolve and get more clarity on who you are and who you aren’t as a person, a company, and a skill set.  There are sales funnels, relationship funnels, click funnels, automation funnels, so let’s just consider the idea that we are trying to growth hack the funnels to scale.  Relationships are tough to scale, but I do think periscope is one of the few exceptions of a product doing this right now.

The reason that growth hacking works with twitter is a minimum of two reasons: When I use the #growthhacking hashtag in my periscope videos which syndicate across twitter I end up getting put on tons of twitter growth hacking twitter lists.  Also when you do what’s called hijacking or piggybacking off  of trending hashtags on twitter you can get more viewers and I’ve seen a jump in replay viewers.  This is a great way to not only get traffic, but many daily viewers who are use to using twitter daily.  Write a great headline, and follow it with some hashtags and on periscope you should see some replay viewers, especially if it’s a shorter video, that recipe makes for more replay viewers.  Twitter and periscope work great together especially when you have a great headline in  your periscope title.  I’ve been using #tagtribes as it gets me a lot of the tribe from our facebook and twitter following to watch my periscope live broadcasts.

To me, periscope is near the end of the funnel where the relationship and trust is built and before the money exchanges hand.  I do think that you could make part of the content and members area as a private periscope chat.  This would be a cool idea that hasn’t been used too much yet.  I like the idea of growth hacking all funnels including periscope.  How can you retain and grow viewers, what kind of social dynamics are involved.  As best I can tell simply saying hi ‘name’ , hello, good to see you again, welcome, all of that from the users perspective creates a connection and makes them feel welcome to keep coming back.  This seems very subtle but done 50x a day every single day creates a compound affect, possibly scaling and exponentially growing your tribe and relationships, your community.  Funnels help keep people in your life daily remotely especially when, roads, states, countries and continents separate us all.