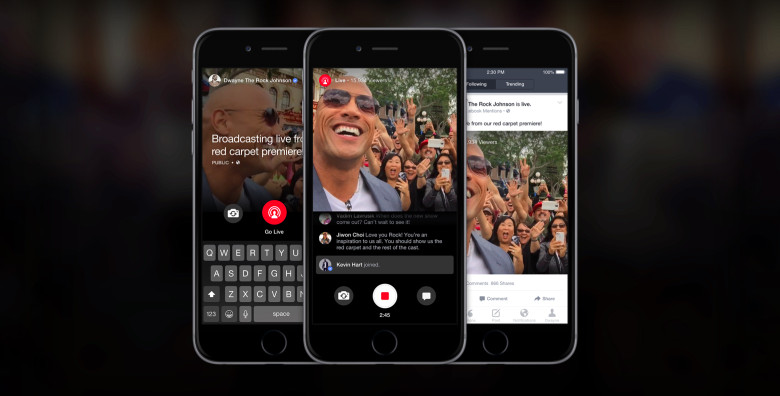 So later last night around 7pm I just found out about facebook mentions going live with celebrities and how the pages are going live and we’ll have to see how this is a future rival of periscope.

One thing for sure is that platforms will keep competing with these other through mutli-platforms, and multi-channels. Here are two of the pages just released facebook mentions and facebook live streaming like periscope where you can see how it’s going to work from the articles.  “The social network added the feature to Facebook Mentions, the app launched in July 2014 that celebrities such as actors, musicians and athletes use to engage with their fans, who can leave comments.

I believe The Rock is going to be a big part of the movement to help with the debut of helping it gain traction.

Mentions for Celebrities Only in the Beginning

In the beginning of this new concept for facebook they are only allowing large pages and celebrities to do the live stream and the mentions, so that’s a bit different then how periscope is where anyone can do it.  This will be interesting to see how that goes.

I want to see how much traction mentions gets in the beginning.  Keep in mind google with search and youtube of 1 billion users a month, which is an old stat is similar to facebook and other big audiences these days.

Having said that, google plus with 100 to 400 million users with a forced login on google plus just really never gained traction.  It’s like they tried to be a facebook and just were never as good.

They seem to be re-pivoting now.  I’m not sure which direction their pivot is going I’ve heard it will be somewhat like pinterest.

Pinterest I’ve had a hard time to tie in with my other social media marketing.  It feels static to me even though some think it’s dynamic, and I just don’t feel it’s that social.

It’s a great way like facebook for a cloud storage of targeted types of photos.  In the end I think we are all trying to carve out our niche and tribe on the internet.

At this time it’s far too easy to tell.  Right now we know that mentions is going to have a lot of hype and a big push in the beginning to spread the word, but it has to retain people, get people to love it and share it with others otherwise it doesn’t gain traction and continue to grow.

Facebook is at 1.49 billion people and it’s always trying to continue to grow and get more billions using the internet overseas, but I think they need to figure out a way to help more people actually monetize and make money with their concept, so that they want to keep paying for facebook advertising.

At this time no matter what channel you are on I just feel that headlines are such a key piece of carving out the internet.  That’s good old fashion copywriting and headlines promise the value to come, and this is why people click your link to show up.

Enough good headlines that deliver over time will compound.  If your headlines stay on target you may just carve out your niche and build your tribe.  It’s best to diversify and build it on instagram, twitter, facebook, wordpress, seo, periscope because in the future we don’t know which platform will win out.

"I'm ready, I've decided it's time to sell my mn home as-is, fast cash or seller financing offer!” If you liked this article above...Remember to click to subscribe and follow meon my Facebook Profile